The Gift of Memoir: Show Up, Open Up, Write
22 Comments

The Magic of Intention 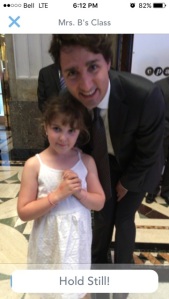 Before she left for Ottawa with her parents for the Canadian Dance Festival, eight-year-old Eowyn announced, “I’m going to have my picture taken with Prime Minister Trudeau.” Ha!

Once words are launched into the air, atoms and molecules perk up their ears and set the stage. The girl’s parents noted the flurry of molecular theatrics and unwittingly began to conspire with them.

My niece Kate, who is Eowyn’s mother, had won an award in the dance world. She arranged for me to receive a formal invitation to the reception from the Minister of Heritage. On the day of the event, I drove the four hours to Ottawa, and checked in to the downtown hotel where other family members were staying. I took a taxi through the stop-and-go traffic to the site of the reception, and passed through the security queue.

Hundreds of dancers were gathered on the second floor of the Sir John A. MacDonald building on Wellington Street. Wine flowed, an Aboriginal dancer welcomed us to this traditionally Algonquin land, the several speeches were short, and the award was presented to Eowyn’s mother. Dancers milled about, jubilant to meet others devoted to this same artistic pursuit.

Eowyn and her parents eventually wandered out to a quieter space at the glassed-in front of the building. They looked out. A black limousine pulled up to the sidewalk.

Prime Minister Justin Trudeau emerged from the limo with an entourage of body guards. A waiter whom Eowyn had befriended asked her if she wanted to meet the Prime Minister. Eowyn said “Yes!” and the waiter yelled, “Quick, downstairs!”

They dash down the stairs to another reception room. What happens next is as much the mystery of molecules—obviously listening—as it is the universe fulfilling a promise to a young girl. Knowing this was meant to happen, Eowyn self-assuredly jumps the line of officials wanting to talk to the Prime Minister. He sees the girl (and the camera-ready waiter), and steps over beside her, big smile on his face. Click. History in the making. Her story.

Did I hear you say you are going to write a memoir? I can hear the flurry of molecules and rustling of paper and tapping on keyboard. I can see pages accumulating. I can feel the stories dripping from your shoulders and fingertips.

History in the making. Your story.

← An Honest House: A Memoir by Cynthia Reyes
Brief Memoir of a Blender →

22 comments on “The Magic of Intention”