The Gift of Memoir: Show Up, Open Up, Write
15 Comments

Who is Your Audience?

Posted by Diane Taylor on May 18, 2015 in Uncategorized

It was Mother’s Day in Port Hope. In a small house, gray clapboard with blue shutters, the phone rang. Her walker was handy, but so was the phone this time. It was John.

“Mom, you have to write your story!”

John had just reconnected with the yoga teacher his mom had signed him up with when he was five … over six decades ago. Out of the blue, it was time to know more about his mother’s spiritual path.

A few days later, at the meditation class that she runs, Melodie told us that she was now going ahead with her memoir. Surprise! Several people over the years had urged her to tell her story, either orally into a tape recorder so that it could then be transcribed, or written in her own words.

No, she’d said, I don’t want to go back. She saw more value in the one-on-one, here and now. Another time, long silvery hair twisted into a knot on the top of her head, she shrugged her shoulders and said, who would it be for? “Us!” cried those in the room. But we weren’t motivation enough. When she read my book, and in particular the passage about Thomas Merton’s book, The Seven Storey Mountain: An Autobiography of Faith, she remembered that Merton’s book had been one of her mentors. Following his example, she began writing down a few memories. Perhaps, she thought, her written stories could be a way of mentoring others. Then, life got in the way—celebrations, lunches out, illness, the beautiful walker, but the damn “Mr. Ugly” new chair that does cushion her bones.

It was a son’s cri de coeur that gave her the audience she needed. Who would she write for? For him. Now would be the time to make a ritual of sitting down to write. To talk to him. What better audience than your son? Melodie Massey is hyped! Quite possibly, by this time next Mother’s Day—when she will be 93—her story will be complete.

Do you know for whom you are writing your memoir? Knowing who your audience is will help clarify what it is you want to say, what it is you have to say. And will get your “ass in chair.”

A few people do write their memoir just to keep track of their lives, or to get things off their chest with no intention of anyone reading it. Indeed, this can be healing, and studies do show that the immune system is enhanced by writing down troubling events, even if the paper is burned afterwards. But many writers of memoir have an audience in mind.

When I asked Cynthia Reyes (www.cynthiasreyes.com) about her audience when writing her memoir, A Good Home, she said this:

My first audience was probably myself! I imagined a fairly well-educated woman over 40 who had been through some big ups and downs in her life. Someone who could empathize with another woman in a similar situation. She was someone I would like to spend an afternoon with.

I imagined she was fairly well-read, had probably done some traveling and would be interested in my childhood experiences in Jamaica. And most of all, I imagined her as someone who had a memory of a special home, and who either wanted to believe in God, or – even if an atheist – could understand my faith struggle.

How it turned out: From the hundreds of letters I’ve received, I’d say that is indeed the majority reader of my book.

Sidney Poitier wrote The Measure of a Man for his granddaughter so that he could be a presence in her life even after he was gone and she was grown. Abigail Carter wrote The Alchemy of Loss for other grieving spouses who had also lost husbands or wives in the Twin Towers during 9/11. Her peer group, support group, was her audience. At 105, Samuel Smith told his story in To Shoot Hard Labour for the new generation so they would remember what early life was like in Antigua. Marina Nemat’s audience for Prisoner of Tehran, was all who would listen. To warn us. I heard her say here in Port Hope that we all need to be on guard, that what happened in Iran could happen in Canada if we are not vigilant.

When I wrote my first book, The Perfect Galley Book, I was talking to other sailors, and anyone interested in the sailing life. It was a continuation of the sharing lifestyle my partner and I led while living aboard the 46′ sailboat we built; it covered a ten-year period of my life. Sailors get together when at anchor to share knowledge and knots, rum and recipes, the lore and lure of the sea, and the writing of my book was more of that. It was pure nautical pleasure to put that book together.

Of course my new book, The Gift of Memoir, has a specific audience: people who want to write the stories of their life. I imagined I was talking to the women and men who have come to my classes. They, and other like-minded people, were my audience.

I’m curious! Who do you want to read your stories? A son or daughter? Descendants as yet unborn? A specific group of people? All of us? An imaginary empathetic friend? I’d like to hear.

Do someone a favour. Leave a bouquet of your stories.

A Bouquet of Stories

← I Was Named After Renate
Tales from the Pond →

15 comments on “Who is Your Audience?” 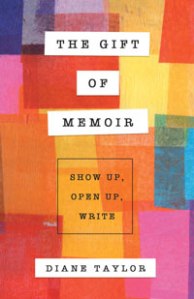